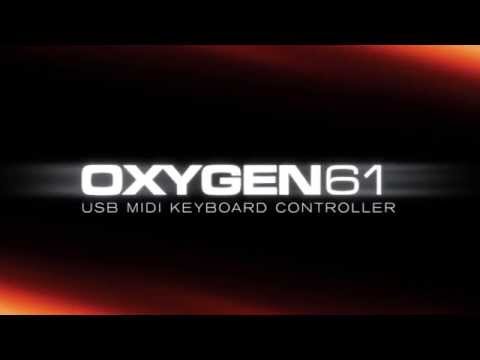 The Oxygen 61 IV from M-Audio features not only sixty-one velocity-sensitive full size keys, but also ships with several music software titles that allows for immediate music making. With the additional array of assignable knobs, pads and faders, the controller provides comprehensive control over the included and other software, facilitating the recording and mixing of music without ever reaching for a mouse.

Aside from the velocity-sensitive keys for playing chords, bass lines, and melodies, eight knobs are available for tweaking effects plug-ins and virtual instruments, along with eight velocity-sensitive pads for triggering samples or finger drumming. And for mixing and controlling the master output, nine faders are available along with dedicated transport controls and track-up and -down buttons that can initiate play, stop, and record in the DAW environment right from the controller.

The controller offers out-of-the-box integration with many DAWs including Ableton Live, Pro Tools, Logic, Cubase and more, with the controls instantly mapped to key parameters in the DAW. Built-in customizable mapping presets can be easily adapted to work with favorite effects plug-ins and virtual instruments, and the factory presets map the various controls to the bundled SONiVOX Twist virtual instruments. Also included are Ableton Live Lite and Xpand!2, a multitimbral workstation offering four active sound slots or parts per patch.