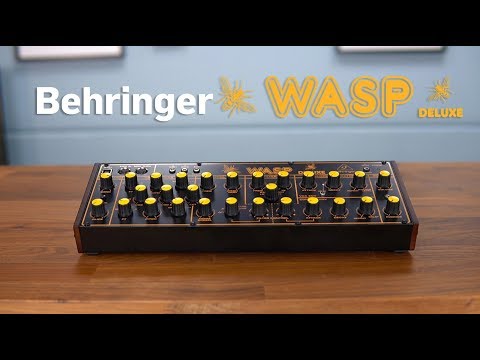 The 1970s spawned the first truly portable analog synthesizer, and while it was quickly adopted by lots of renowned musical artists including Jan Hammer, Chick Corea, Rick Wakeman, Jean-Michel Jarre, Isao Tomita and Keith Emerson to name a few, it was somewhat temperamental and very expensive. In 1978 a unique and quirky little synthesizer was born. The Wasp, as it was called, was a monophonic, two-octave keyboard that used touch-sensitive keys. It was a novel idea back then but tended to be unreliable and difficult to play. An ultra-affordable homage to that iconic synthesizer, with all the features of the original and then some, the Behringer WASP DELUXE lets you conjure up virtually any sound imaginable with incredible finesse and ease. Pure analog signal path based on authentic VCF and VCA designs in conjunction with a flexible 6-shape waveform LFO including noise and S&H with frequency and pitch modulation control. Having your very own WASP DELUXE is like having your own personal time machine, enabling you to freely embrace the past – or shape the future!

True to the Original

Great care has been taken in designing the WASP DELUXE including the true to the original “Wasp Deluxe” circuitry. This is what gives it its ultra-flexible sound shaping capability, which covers everything from super-fat bass and lead tones, stunning effects – and all the way out to the otherworldly sounds of your imagination.

The inspired synthesizer tracks laid down in the 1970s and ‘80s are etched in the annals of progressive rock, wave and synth-pop music forever, making them truly classic in every sense of the word. WASP DELUXE’s pure analog signal path based on authentic VCF and VCA designs, lets you recreate all of that magic – or design incredibly fat and original sounds that will make you a legend in your own right!